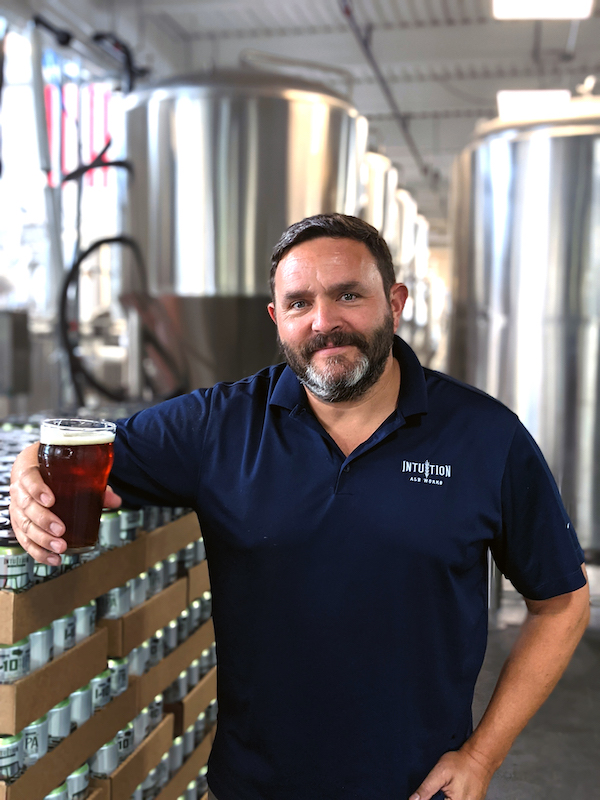 Ben Davis is a Jacksonville native who has always felt a drive to give back to his hometown and help move our city forward.

Ben founded Intuition Ale Works in 2010. Since its opening, Intuition has become the fastest growing brand of craft beer in Northeast Florida.

Davis is an Eagle Scout from Troop 2 at St. John’s Presbyterian, a graduate of Episcopal High School and the Siebel Institute of Technology in Chicago. He currently resides in Avondale with his wife and sons.

An avid drummer, Ben can be found afterhours at The Beat Lab, combining  influences from Neil Peart, Danny Carey, and Mickey Dolenz. He hosts a weekly D&D, and his half-drough paladin is renowned in his mission to rid the Underdark of the spider demon queen Lolth. Brad joined Intuition in 2017 after years of drinking People’s Pale Ale and I-10. Previously, he managed a marketing division at a Global 500 company and, before that, worked at the U.S. State Department.
A native of Neptune Beach, Brad is a graduate of Stanton College Prep, the University of Florida, Emory University, and Georgetown University.
In his spare time, Brad can be found at Huguenot Park, adding to his guitar collection, or traveling the country to see Wilco play. He lives in Avondale with his wife and daughter. They are long-time supporters of Chelsea FC. 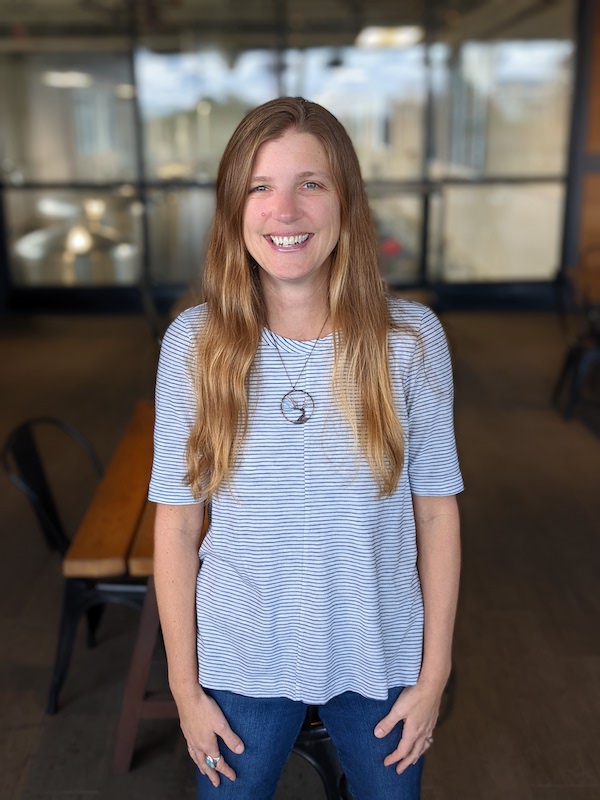 A reformed elementary school teacher, Lindsay wears many hats at Intuition Ale Works and enjoys being a part of the company’s growth. She started as a beertender on Intuition’s opening day and has been hooked on the industry ever since. You can find her handling day-to-day operations and shenanigans.

She is proud of launching The Bier Hall event and concert space, summiting (summoning?) the astral plane, and rage cleaning.

Outside of work, Lindsay’s favorite thing is attending bluegrass festivals all over the country. She travels with her husband and kids, and often with her amazing parents and kickass brothers. 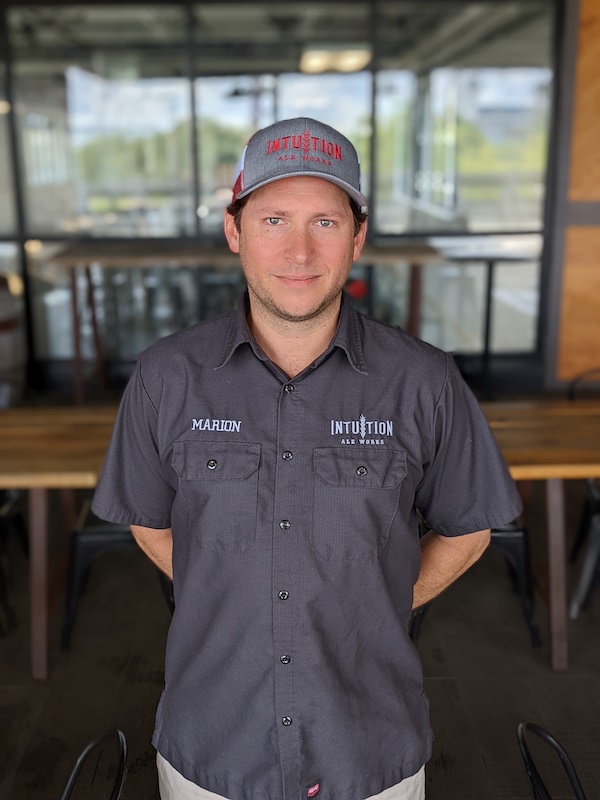 Marion is grateful for the opportunity to lead a world class production team at Intuition.
Marion is a Jacksonville native who began his passion for craft beer as a competitive homebrewer and beer judge before making his foray into the professional beer world. He returned to Jacksonville to join IAW in 2021, after filling the roles of Director of Operations and Head Brewer for Dead Armadillo Brewing in Tulsa, Oklahoma.
He loves spending time with his wife and three kids. A karoke afficionado and pinball enthusiast, Marion’s hobbies include travel, playing music, reading, camping, backpacking, and cooking. 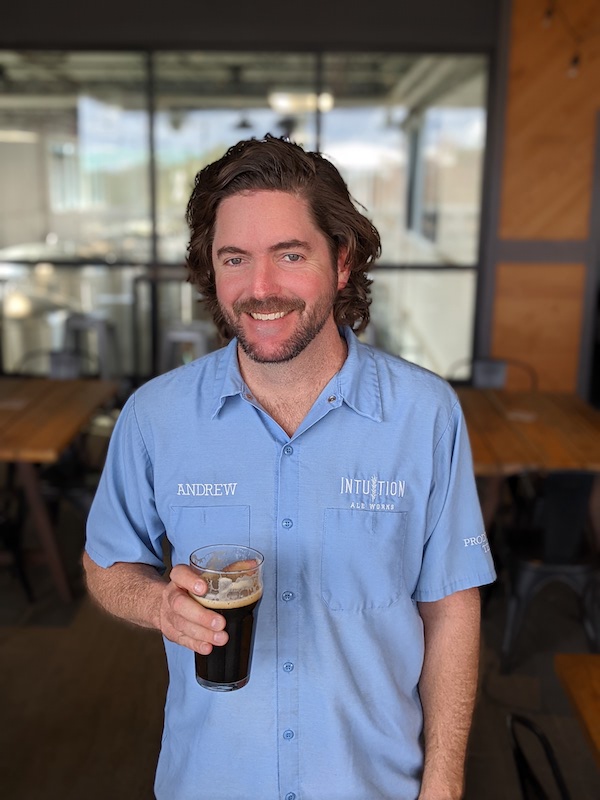 Andrew’s first forays into brewing were as a home brewer. He brewed his first batch of beer just before heading off to college at Florida State University, where he earned his master’s degree in social work. Shortly thereafter, he embarked on a lengthy road trip, where he immersed himself in craft beer culture. He landed in Atlanta, where he acquired a position as assistant brewer at a busy brew pub in the growing Atlanta beer scene. Three years later, he set his sights on returning to Florida just as Intuition Ale Works was launching.

He brews for the love of the craft and the satisfaction of seeing IAW patrons partake in one of civilization’s oldest rituals – relaxing and socializing over beer.

Andrew enjoys nature, reading, cooking, and relaxing with the hi-fi. 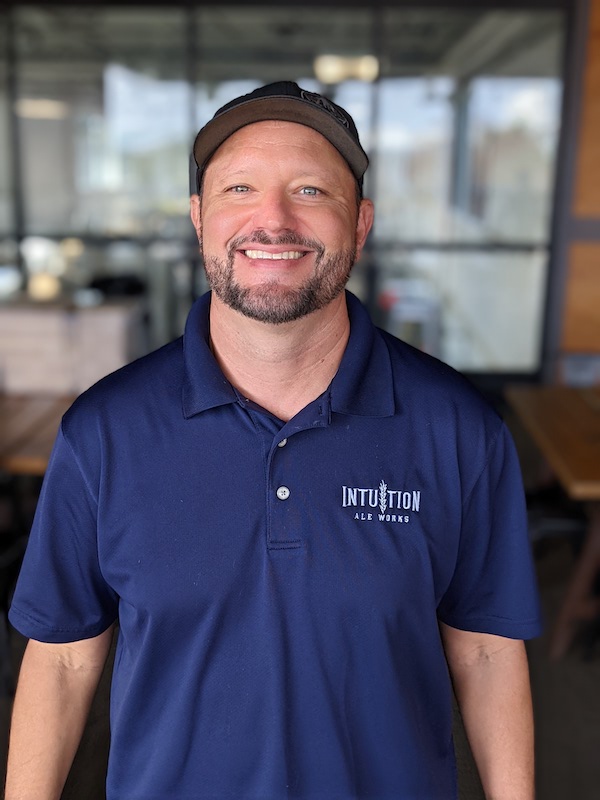 Daniel worked in the wine and spirits industry in both distribution and retail for a decade prior to joining Intuition Ale Works. He has traveled around the world in the pursuit of developing and perfecting his palate. Daniel’s favorite part of the job is helping new consumers of craft find a beer that they like.

Daniel is a fun-loving, incredibly competitive personality who grew up in Gainesville, Florida. Daniel is a proud father of a daughter who inherited his competitive nature, competing in USAG gymnastics and a national dance team in Jacksonville. 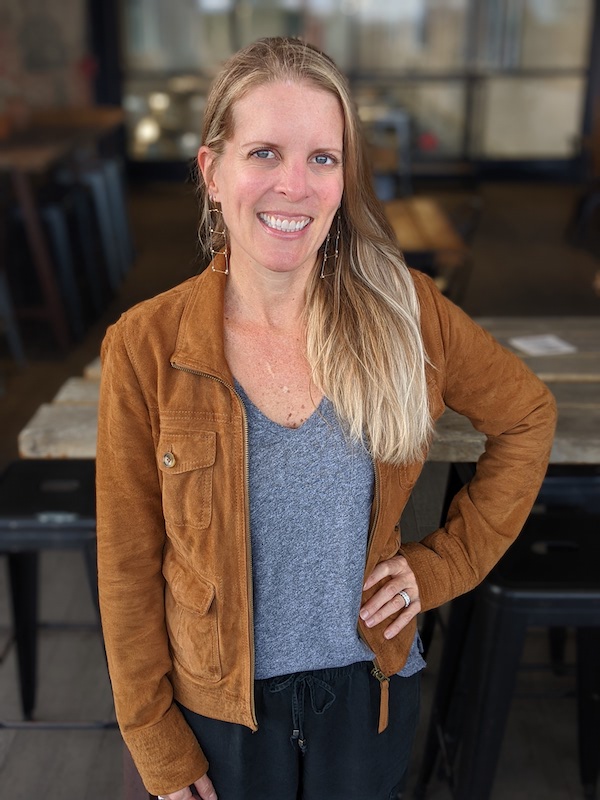 Melissa organizes and manages events for Intuition’s entertainment and hosting spaces, as well as interfacing with guests to help them creatively maximize their experiences.
In addition to her expertise in events, Melissa is also a Cicerone certified beer server. She brings to Intuition her love of beer and experience as the Executive Director of the Florida Brewer’s Guild, where she served from 2014-2017.
When she’s not crafting exceptional brewery events, Melissa enjoys world travel, wine, and gardening. 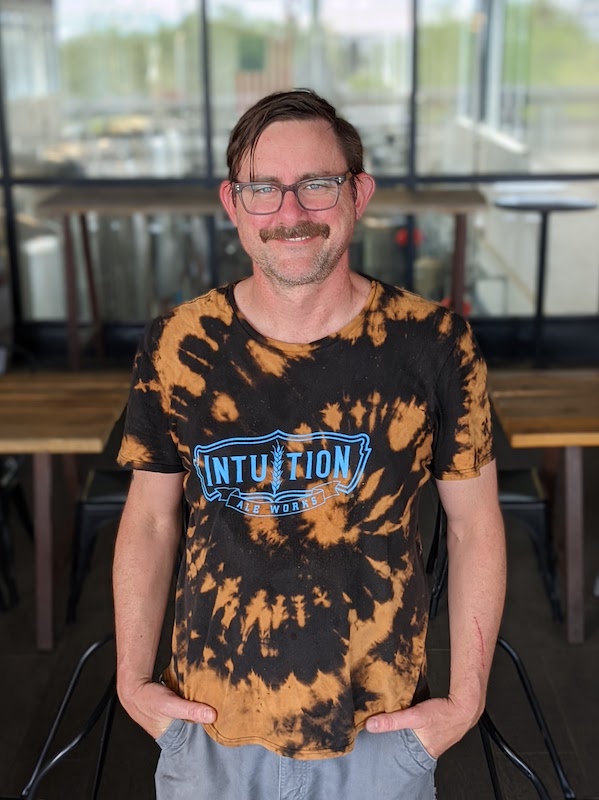 A longtime member of the Intuition Team, Pete is an expert in making sure our beers make it into cans and kegs for public enjoyment. He also enjoys the title of Assistant to the Semi-Automatic Depalletizer.

Pete enjoys disc golf in his spare time, time with friends and family, and  crafting ambient musical multitrack think pieces in his garage. 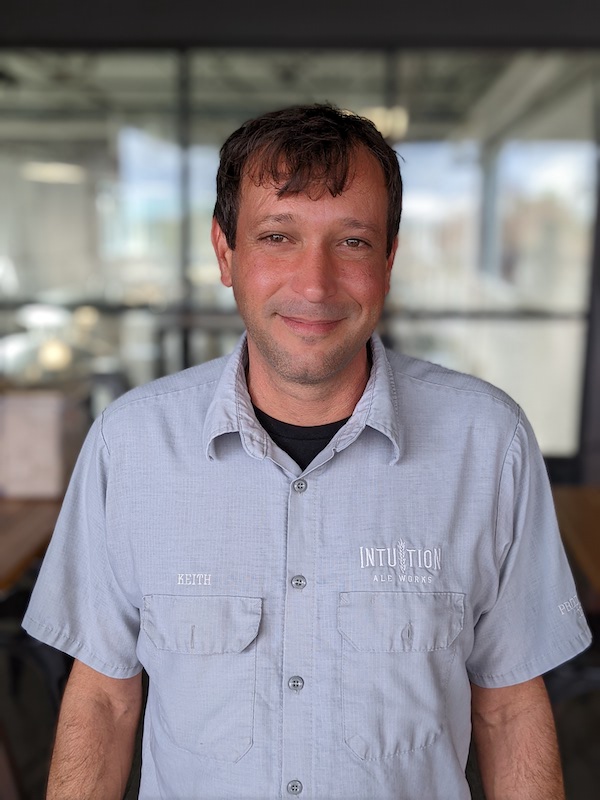 A Mississippi native, Keith always felt the warm pull of the state of Florida, and is proud to head up the laboratory and advanced scientific studies program at Intuition.

A plumber by former trade, he is always up for nitty gritty details that make the brewery purr. He specializes in hands-on work and performing complicated maneuvers in the lab.

Affectionately known as The Pontchartrain Playboy, he enjoys long walks on the beach, caring for small animals, and getting caught in the rain.

He also applies his art to an exceptional jambalaya. It’s all about the right ingredients, a gentle hand, and knowing when to add a touch of spice. 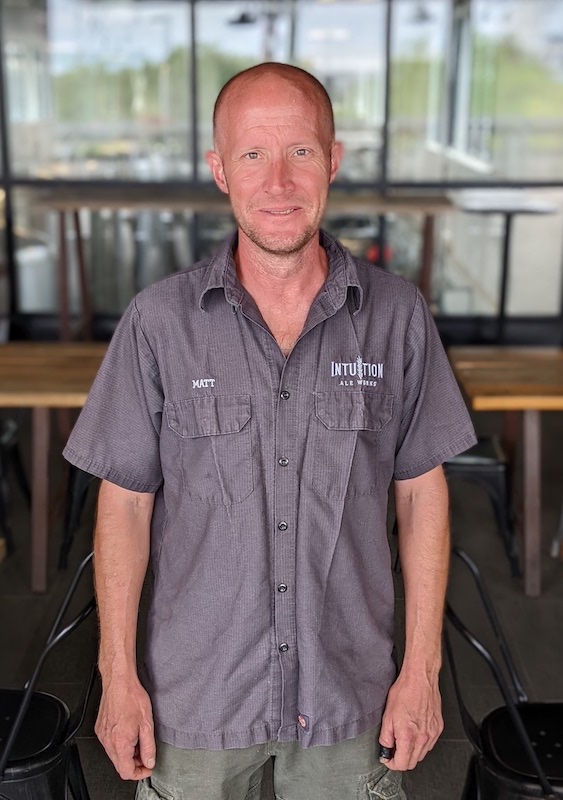 What is your favorite Intuition beer? That changes a lot.  Right now I’m bouncing between the Civic Pride and Tiki Pale but Shotgun Shack was the first one I fell in love with.

When did you start at Intuition? I started as financial support from the beginning (OK, so I just hung out in the taproom a lot).  After a while they decided they might as well get some work out of it and put me on the payroll end of 2011/early 2012

What is your favorite thing about working here? I get paid to make beer with a pretty awesome team.

Who is your favorite band? Johnny Cash

Where is your hometown? Bowen, IL (bet you can’t find it on a map without Google’s help)

What is your favorite sports team? Arsenal FC 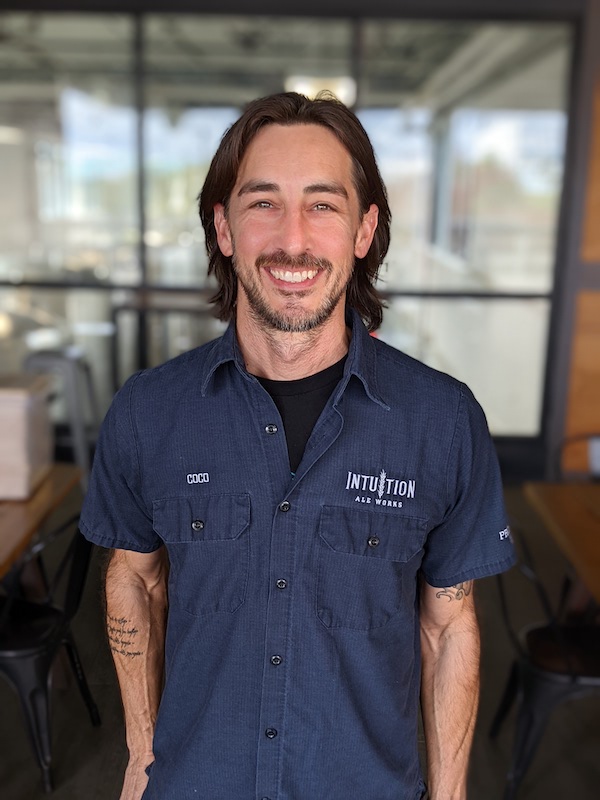 Glenn started working at Intuition in August 2016 with the opening of Bay Street location.

When he’s not brewing suds, he can be found wandering the streets, singing aloud to the tunes of Outkast & Sons.

He will never forget his Augsburg, Germany girlfriend and son. #loveyabooboo

His hobbies include obstacle course racing, running, and frolf. #ripsteinmart

Glenn is a graduate of Siebel Institute of Technology and Doemens World Brewing Academy. 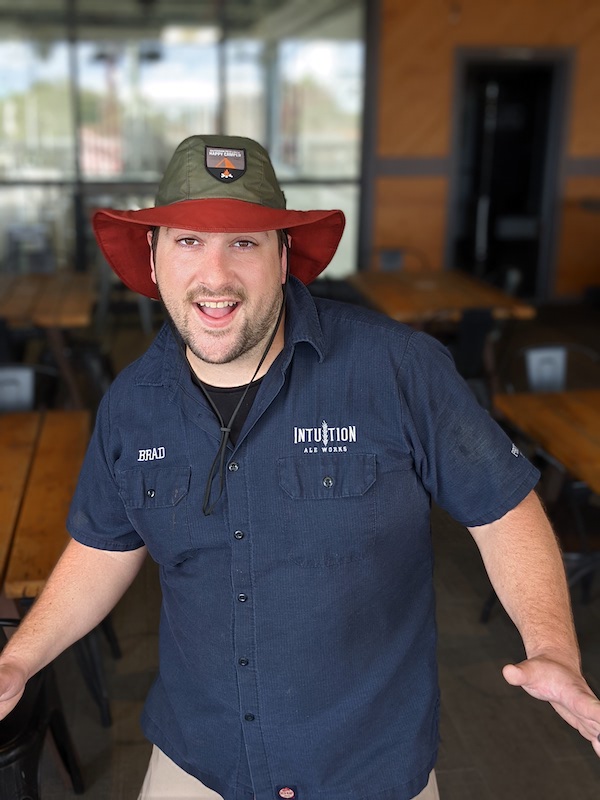 Mr. Hunt joined Intuition on St. Patrick’s Day of 2016 and quickly ascended ranks to become head of the Cellar Department. His responsibilities include tank and equipment cleaning and maintenance, liquid transfers, and oversight of cellar operational procedures.

His eclectic approach to functional work attire is a vanguard of progressive couture.

He claims never to have lost a game of ping pong on brewery soil. His other hobbies include skating, kickball, foursquare, disc golf, and riding bikes. He also boasts a modest Slinky collection.

Originally hailing from Chicago, Brad has a degree from UNF, and supports the Cubs, Jaguars, and Knights. His favorite band is Rush, and his top Intuition Beer is Easy on the Eyes. 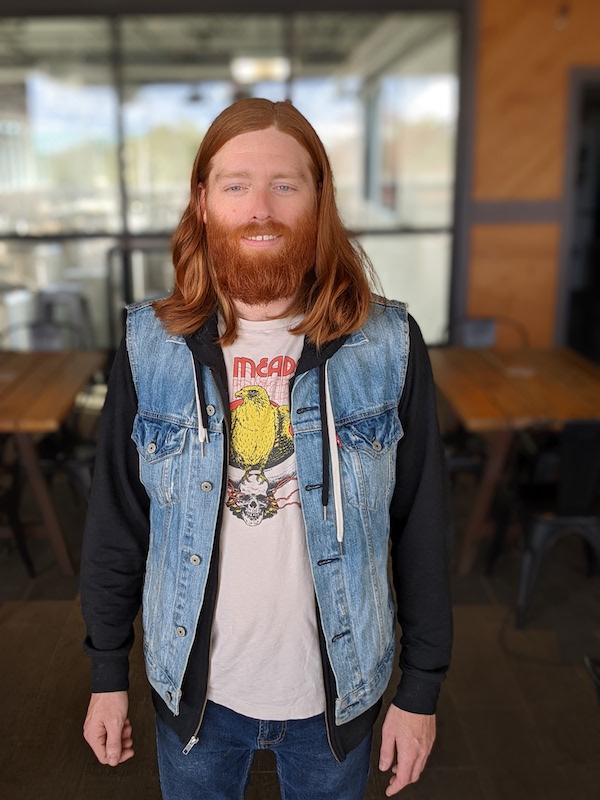 Nick joined Intuition when the Bay Street location opened in 2016. His knowledge of world beer styles coupled with an appreciation for brewing techniques and innovations make him the ultimate beertending sherpa for both the most and least experienced guests.

In addition to his enthusiasm for craft beverages, he also has a passion for leisure and the silence which serves as the foundation for creativity. He can often be spotted strolling the streets of Avondale in contemplation. 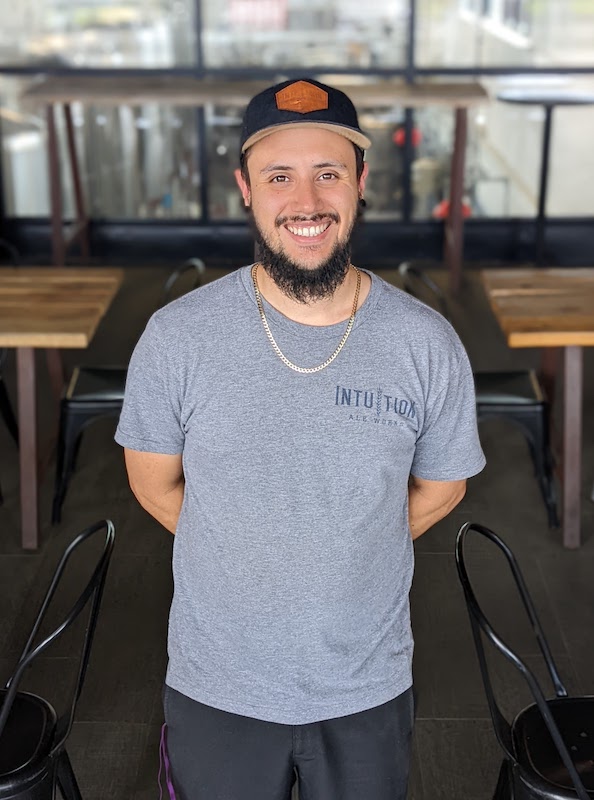 What is your favorite Intuition beer? Snake in the Grass

When did you start at Intuition? May of 2018

Who is your favorite band? Outkast

Where is your hometown? Rota, Spain

What is something about you that people don’t know? I’m a history nerd.

What is your favorite sports team? Jaguars 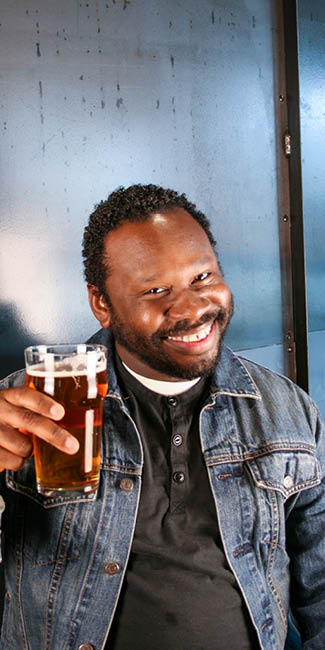 What is your favorite Intuition beer? Cocoa Caliente

When did you start at Intuition? Officially? November of 2014.

What is your favorite thing about working here? My co-workers

Where is your hometown? Jacksonville

What is something about you that people don’t know? I hate mayo.

Did you go to college? University of North Florida 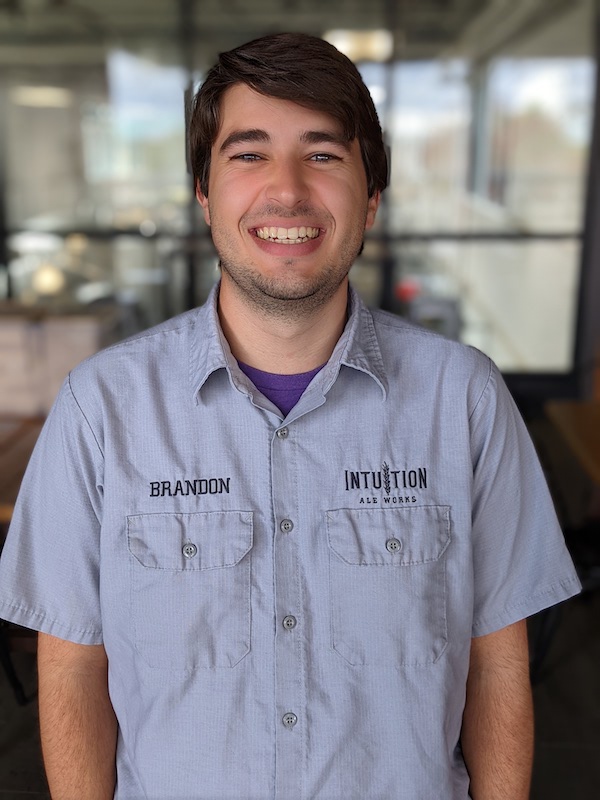 What is your favorite Intuition beer? Easy on the Eyes

When did you start at Intuition? March of 2019

What is your favorite thing about working here? The welcoming atmosphere and great people around this company.

Where is your hometown? Jacksonville, FL!

What is your favorite place to go in Jacksonville? Riverside and the Beaches

Did you go to college? University of North Florida

What is your favorite sports team? Jaguars 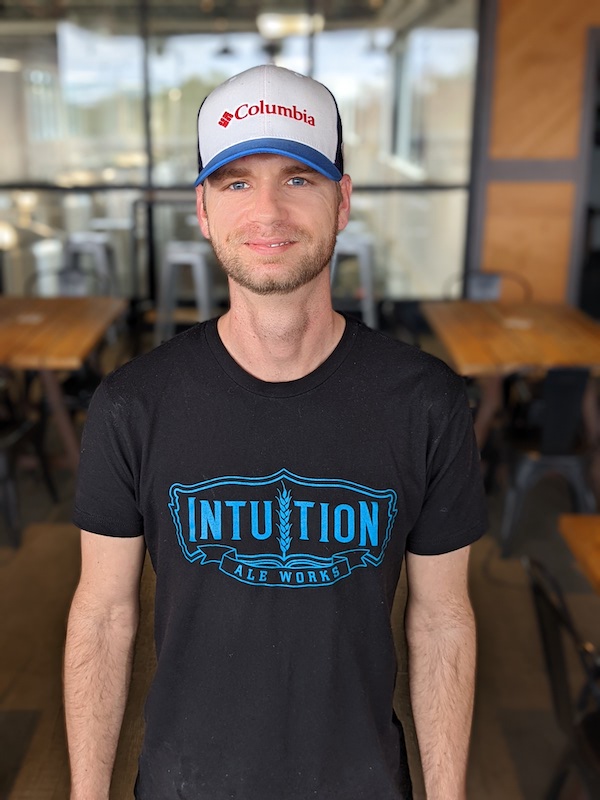 What is your favorite Intuition beer? Jon Boat or Devil in the Details

When did you start at Intuition? September, 2019.

What is your favorite thing about working here? The welcoming atmosphere.

Who is your favorite band? Fugees, Supremes, Die Ärzte

Where is your hometown? Merseburg/Saale (Germany)

What is something about you that people don’t know? I’m a bad driver.

What is your favorite sports team? Borussia Dortmund 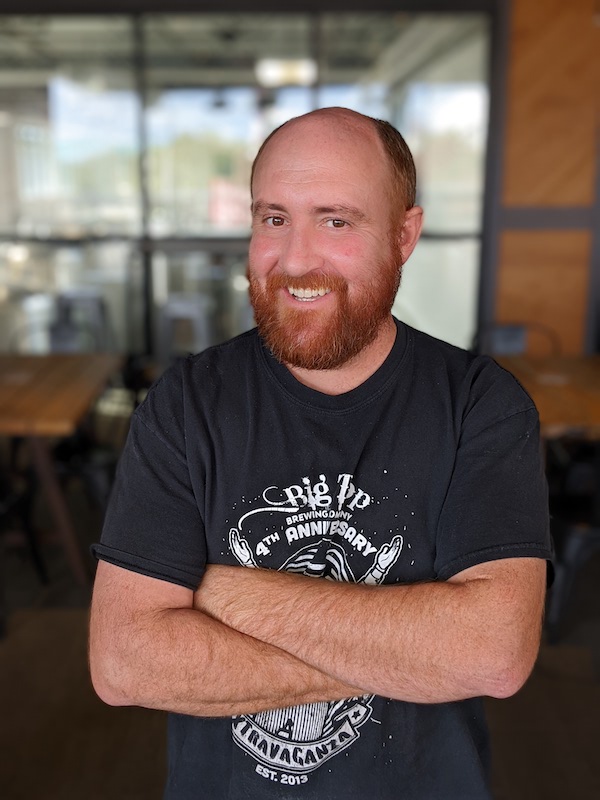 Patrick joined the Intuition team as a Swiss Army Man in 2021, where he wears a lot of hats and is always ready to step into various roles to lend a hand.

His other brewery credits include three years at Big Top Brewing Company as a Celeryman, as well as a stint as Head Brewer at Kombucha Dog in Los Angeles.

Patrick is an experienced actor and musician, and can be likely spotted in the background of some of your favorite shows. When he isn’t at work, he enjoys spending time with his wife, working on his house, playing with the First Coast Wind Symphony, and hitting up trivia nights. 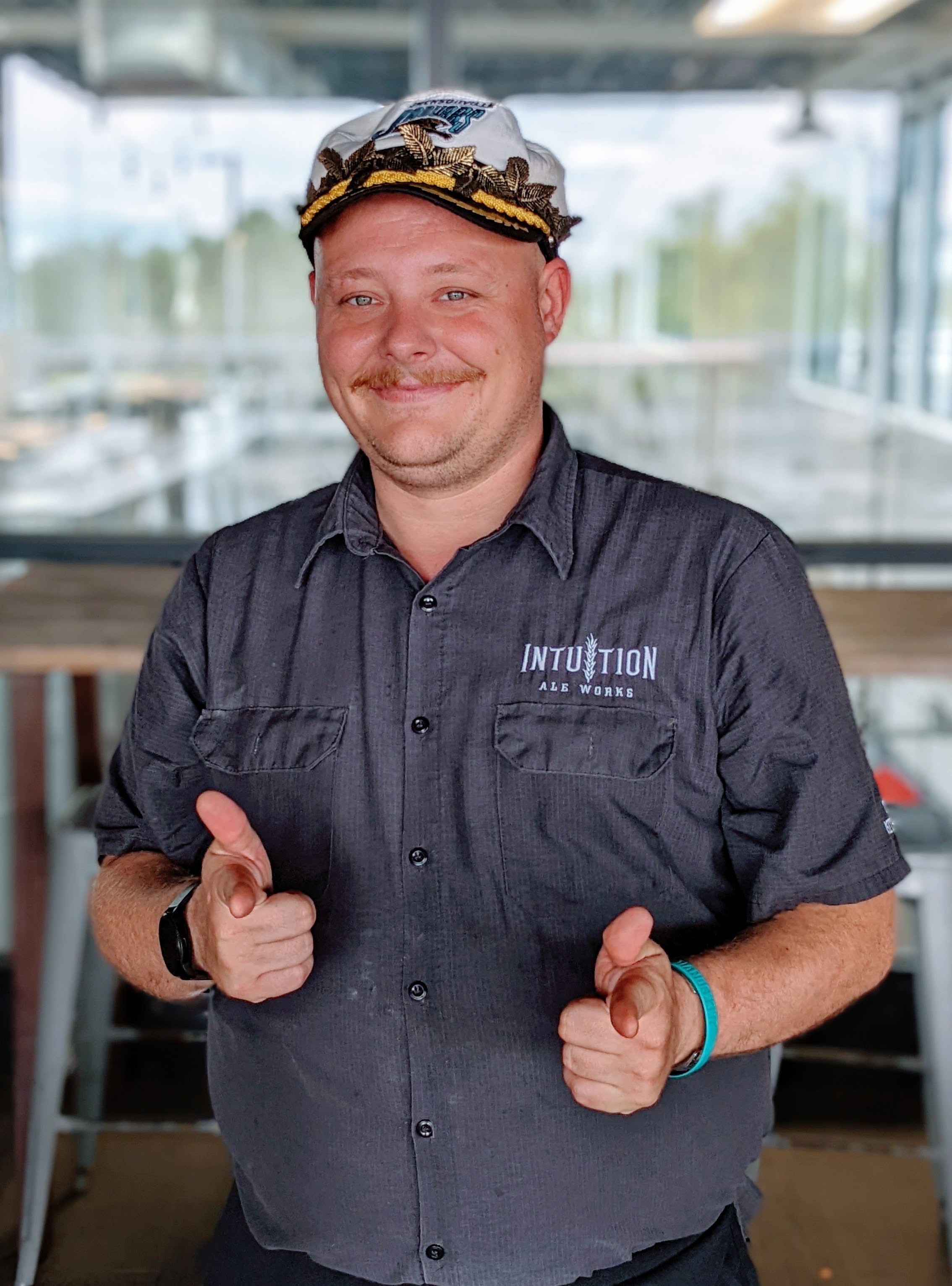 Joe directs the kitchen, crafts new culinary creations, and manages the menu for Intuition. He loves the team spirit, creative freedom, and working alongside his dad.

He credits his parents for instilling a love of cooking in him from a young age. 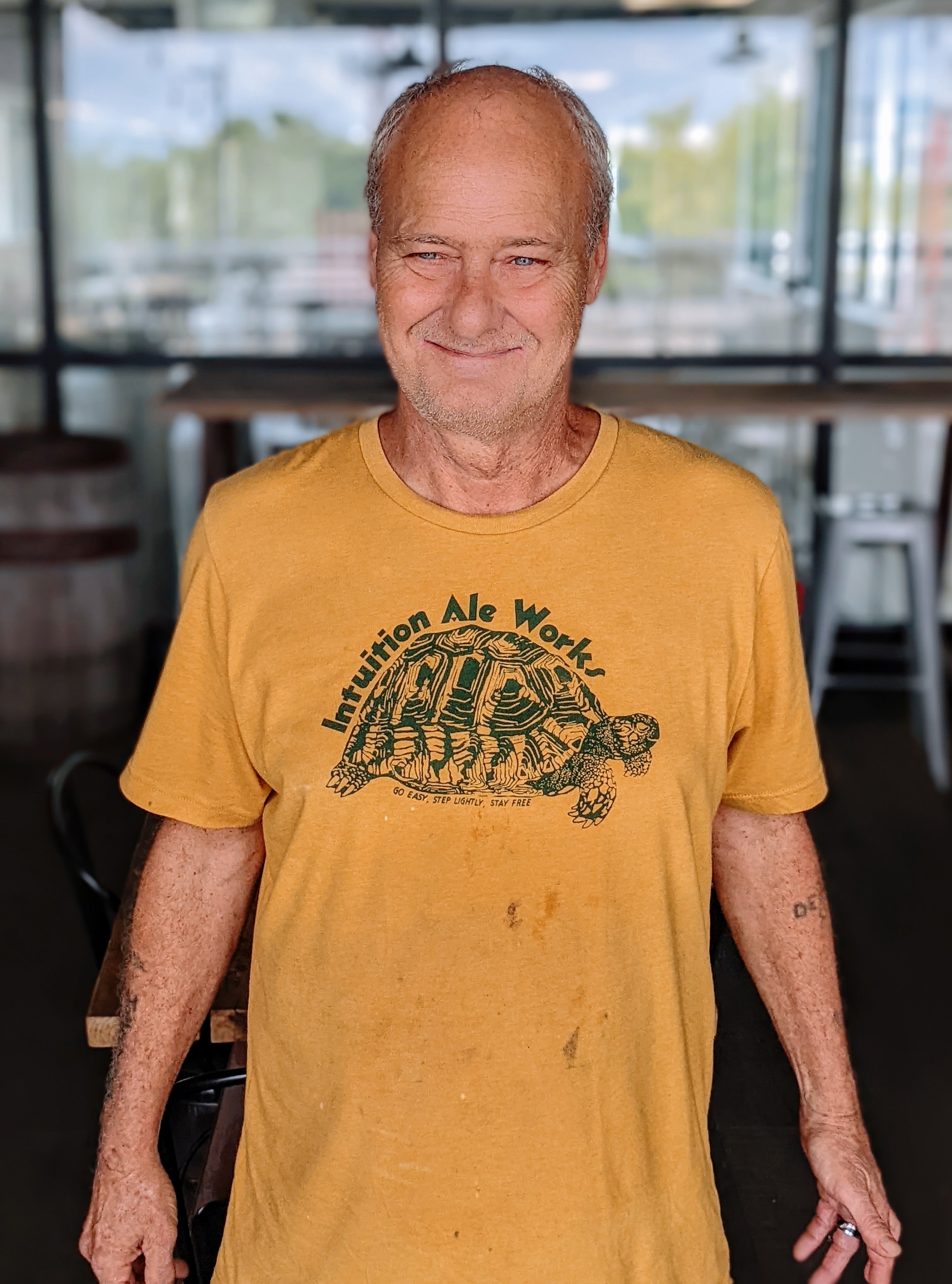 Born in Claxton, GA, Pops is an indespensible member of the Intuition Kitchen.

A father of six, his children are the proudest part of his legacy.

He once worked at the Old Pier, where had the honor of serving such cultural luminaries as Fred Durst.

He once lost a Cadillac on the state line. Ask him how! 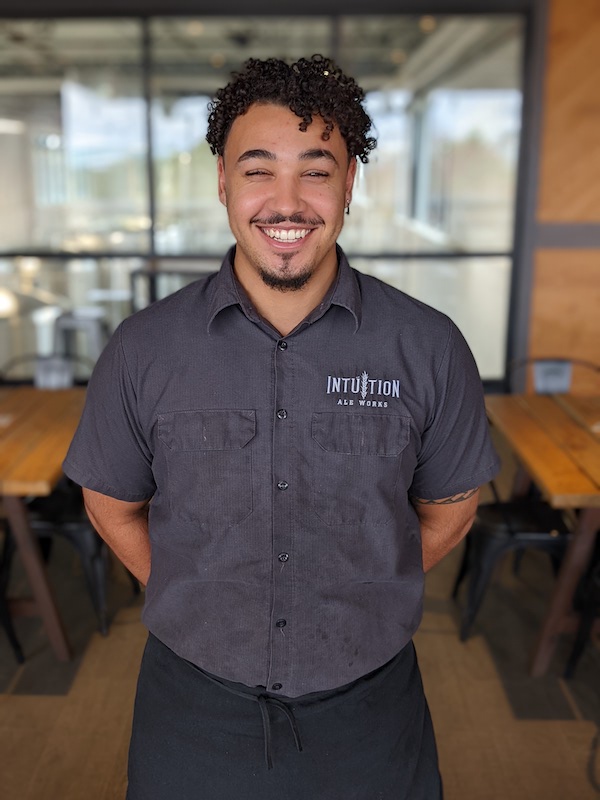 Michael has worked at Intuition since 2021. Hired partially because of his winning smile, he has since proven to contribute an essential role to the kitchen.

In his spare time, he enjoys playing sports, especially basketball, and enjoying an eclectic assortment of music.

Though he spends his time at Intuition focused on producing culinary delights found on our menu, he loves to craft a good mixed berry cobbler.

His favorite things about working at Intuition are the laid-back atmosphere and the high attention to quality that he shares with his coworkers.

We're open at 10 a.m. for every Jaguars home game! Come pregame with our 21 taps and gameday food menu.